The Rock Adds Fortnite To His Long List Of Acting Credits

The Rock in Fortnite Chapter 3 Season 1

The Rock might well be the busiest person on the planet. Even while the rest of the world was gripped by a pandemic, The Great One managed to star in a tonne of new movies.

His newest Hollywood venture Red Notice, in which he stars alongside Gal Gadot and Ryan Reynolds, has already become Netflix’s most-watched movie ever. Between Red Notice, Black Adam, Jungle Cruise, and whatever else Rock has going on, it’s no wonder he wasn’t available for Survivor Series.

The Rock Is The Foundation

While The People’s Champ might not have been free to show his face at Survivor Series, he did find time to become Fortnite canon this weekend. The blockbuster game staged The Finale to its second chapter on Saturday. During the event, players were tasked with delving deep into the game’s map at which point they came across a character called The Foundation.

Fortnite: Dwayne The Rock Johnson thanked for saving the day

The chapter 2 of Fortnite, the popular battle royale game, came to an end on Saturday with players seeing the entire island flipped over.

The game was taken off air by Developer Epic Games before the start of Chapter 3 on Tuesday.

The Fortnite Chapter 2 finale event, called :The End” ends in a battle with the Cube Queen.

The Foundation, played by actor Dwayne “The Rock” Johnson plays the key role as players participating in the event had to fight off the Cube Queens’ minions.

The Rock on Saturday took to Instagram to share his appearance from the game with a caption “We flipped the island. Now it’s time to take down the Imagined Order FortniteFlipped.”

More than 3.8 million people liked his Instagram post while many others thanked him for saving the day.

Turns out that The Foundation is exactly who Fortnite fans thought it was.

Who among us does not love Dwayne “The Rock” Johnson?

Somebody, I’m sure, but that doesn’t help me make my point. One of Hollywood’s highest-paid film stars has made his way to Fortnite, finally and inevitably, and he’s playing exactly the character that fans thought he was: The Foundation. Fortnite fans are predictably stoked.
With armor styled after Dwayne Johnson’s distinctive Samoan-style family tattoo, heroic vigilante The Foundation has been trying to stop bad people from doing bad things to The Zero Point. There’s a lady named The Cube Queen involved.

Look, it’s relatively complex, but we’ve got a whole guide about what’s going on with Fortnite’s transition from Chapter 2 to Chapter 3.

The event stream, linked above, is the end of Fortnite Chapter 2. It’s just like how Chapter 1 transitioned to Chapter 2, in a way: With the island seemingly destroyed, players are left floating on an endless sea. Now Chapter 3 is on the way, ushered in by The Rock and including both downhill sliding and web-slinging Spider-Man mechanics. 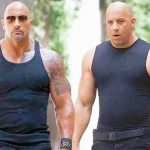 Why does the Rock hate Vin Diesel? What Happened with Dwayne Johnson and Vin Diesel?