If you want to be extra safe, stop reading comments, mute keywords, and start staying off social media today!

Convoluted as the Marvel Cinematic Universe has gotten, Holland’s latest opus spins two decades and three iterations of the Spidey brand into a satisfying meta-adventure.

What do you call the opposite of a reboot?

The “system overload” of Spider-Man movies, Sony’s ninth (and almost certainly not last) feature-length riff on the friendly neighborhood superhero, “Spider-Man: No Way Home” seeks to connect Tom Holland’s spin on the web-slinger with the previous live-action versions of the character by first reassembling a rogue’s gallery of all the villains Peter Parker has vanquished to date. Returning director Jon Watts — whose bright, slightly dorky touch lends a welcome continuity to this latest trilogy — wrangles the unwieldy premise into a consistently entertaining superhero entry, tying up two decades’ of loose ends in the process.

The third installment in Marvel’s “Spider-Man” reboot sees Tom Holland’s webslinger join forces with familiar friends and square off against some past enemies.

Marvel’s multiverse is a concept that, creatively and strategically, allows for endless reinvention and massive proliferation, both of which are the guiding principles behind Spider-Man: No Way Home, a gargantuan sequel (in theaters Dec. 17) that sets the franchise on an alternate-realities course by expanding to include not only its own characters but also those from Sony’s earlier web-slinging series. Chief among that cast are Green Goblin (Willem Dafoe) and Doc Ock (Alfred Molina) and Electro (Jamie Foxx)—oh my!—yet there are many more surprising faces populating this would-be blockbuster, some of them wearing arachnid-y masks.

The past and the present smash together in Jon Watts’ tentpole, begetting a future of infinite Frankensteinian superhero remixes and do-overs—and resulting, in the here and now, in the finest wall-crawling MCU effort to date.

Spider-Man: No Way Home is a 2021 American superhero film based on the Marvel Comics character Spider-Man co-produced by Columbia Pictures and Marvel Studios and distributed by Sony Pictures Releasing.

The film is directed by Jon Watts, written by Chris McKenna and Erik Sommers, and stars Tom Holland as Peter Parker / Spider-Man alongside Zendaya, Benedict Cumberbatch, Jacob Batalon, Jon Favreau, and Marisa Tomei. In the film, Parker asks Dr. Stephen Strange (Cumberbatch) to help make his identity as Spider-Man a secret again with magic. This leads to the multiverse breaking open and allows supervillains from alternate realities to enter Parker’s universe.

Once-in-a-lifetime films are pipe dreams for most studios, yet, here’s Marvel showing off the fact that they have us all in the palm of their hands yet again.

Spider-Man: No Way Home is somehow a perfect harmony of a Saturday morning cartoon and the deep drama that we’ve come to expect from these epics. You’ll find no spoilers here, but the film will remind you repeatedly that there are a whole lot of reasons that Sony and Marvel kept the details of this one as close to the vest as possible.

Despite the fact that there’s so much we can’t talk about here, we can still find plenty of tidbits to discuss, because there’s truly never a dull moment in Spider-Man: No Way Home.

That’s due in no small part to stellar performances across the board. The MCU as a whole has never been a slouch when it comes to casting. Some of the best actors in the world now hold their own respective Marvel roles. But, whether it be the pandemic or No Way Home’s lack of buildup from other installments in the MCU, the performances here feel like something different.

Willem Dafoe nails everything he does, but his reprisal of Norman Osborn is something for the MCU history books. His character — like the rest of the villains who find their way into Peter’s (Tom Holland) universe — is given a new depth that was never explored in previous Spider-Man films. 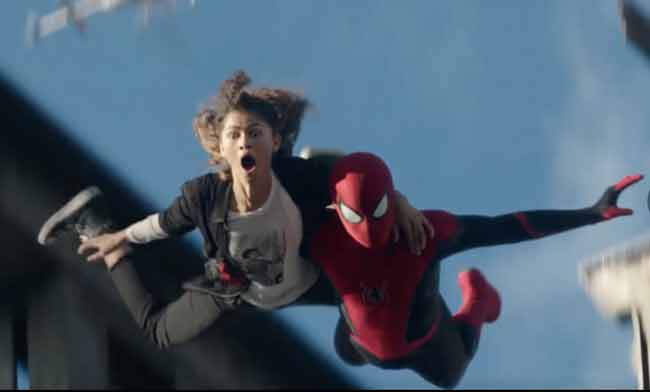 Built around performances like Dafoe’s — Alfred Molina’s Doc Oc and Jamie Foxx’s Electro aren’t anything to sneeze at, either — is the root of Spider-Man: No Way Home’s success.

Amidst the laughs and the tears is a deep, heartfelt empathy that’s felt missing not just in the early MCU, but in the Spider-Man films that preceded this one. That’s not the fault of the creators or the performers of those respective series, but more a result of the times in which they were made, and what audiences were expecting at those times. The early live-action era of superhero fare was much more focused on thwip, thwip, bang, bang than the complex emotional impact of it all. Spider-Man: No Way Home’s empathy finds itself woven into the storyline in a way that doesn’t feel overly didactic or pandering, but instead truly drives home the ethos of Spider-Man: with great power comes great responsibility. Even when it freakin’ sucks. (Especially when it freakin’ sucks.)

What We Said About Spider-Man: Far From Home
IGN’s Jim Vejvoda gave the previous Spider-Man film, Far From Home, an 8.8, writing, “Spider-Man: Far From Home is a grandly entertaining culmination of the MCU wall-crawler’s journey so far. Thanks to its sweet humor, clever commentary, and deft action set-pieces, Far From Home continues the journey of Peter Parker from kid hero to Tony Stark’s successor. The movie sets the table for some exciting new adventures ahead for Spider-Man and his place in the MCU, pitting him against an antagonist who preys on Peter Parker’s fears and insecurities in ways no other villain quite has yet. Far From Home ends Marvel’s Phase Three with a hell of a bang, thrusting its young wall-crawler into a treacherous but hugely exciting new era.”

Zendaya says her ‘Spider-Man: No Way Home’ costar Jamie Foxx had dance parties on set, and she and Tom Holland weren’t invited

The “Spider-Man: No Way Home” star Zendaya said that Jamie Foxx hosted dance parties on the set of the Marvel movie, and she and Tom Holland weren’t invited.

“He would bring music and then the lighting department would play lights as well,” Zendaya, who reprises her role as MJ in Jon Watts’ third standalone “Spider-Man” film (in theaters on Friday), said in a new interview with Serieously.

Zendaya was joined by Holland for a game in which they took turns spinning a wheel with their costars’ faces on it and sharing an anecdote about whichever actor the ticker landed on. At one point, they manipulated the wheel so it would land on Foxx.

Holland described Foxx as “one of my favorite people I’ve ever worked with.” Foxx previously portrayed the villain Electro/Max Dillon in 2014’s “The Amazing Spider-Man 2” alongside the Spider-Man actor Andrew Garfield.